Where to Watch Survivor? (And When Will It Air Again?)

The best place to watch the new season (as well as binge past seasons) of Survivor is on Paramount+.
The best part?
You can get started on Paramount+ for free.
We have a subscription for the kid’s shows, but access to Survivor is a sweet bonus for us!

Get Started For FREE!
Survivor, the all-time favorite American hit reality show created by Mark Burnett and hosted by Jeff Probst, is one of those series that makes your body and mind all hyped up because of how thrilling the show gets every episode.

With over 40 seasons since May 2000, it is no doubt that fans of the award-winning reality show from CBS Entertainment still can’t get enough Survivor action.

We will tell you where you can catch past and current seasons of the show in this article.

In case you’re wondering what happened to the show during the pandemic, let’s answer the most commonly asked questions about the highly anticipated reality series first.

What is Survivor all about?

Survivor is a reality show where the contestants are placed on an isolated island and are challenged daily to provide food, fire, and shelter on their own.

There are usually sixteen or more players which are split into ‘tribes’ that face epic challenges both physical and mental.

Players team up against each other to get rewards like food and ‘immunity’ from elimination that occurs every third night of the game called, ‘Tribal council’.

Tribal council is the game’s elimination ceremony where the contestants must vote off one member of their tribe.

Legendary winners of Survivor will receive a 1 million dollar prize in reality, while the other castaways who didn’t win can also receive a smaller amount of cash.

However, winning the show is no joke according to former Survivor player, Holly Hoffman, the last remaining member of her tribe on the 21st season,Survivor: Nicaragua.

Hoffman had a pretty rough time on Survivor because of how stressful the environment was along with her fellow competitors.

She admitted she learned so many things on the show and that her experience also opened doors to new opportunities like becoming an author and a motivational speaker.

You can go to this link and watch the full interview with Holly Hoffman.

Fans of Survivors rejoice because our favorite reality show will air Season 41 on September 22, 2021.

According to Holly Hoffman, the show got delayed because of the pandemic and producers started filming again sometime during summer 2021.

You can catch the latest episodes of Survivor when you sign up for Paramount Plus here.

Ah, yes, the most common question that everyone has been thinking about since the first episode of the American reality show.

Although some of us might think the reality show is scripted, it is not.

The contestants of the show don’t follow a certain script and the majority of the show is not staged including the sleepless nights, the strategies, and especially the brutal elements of the show.

All of these are what make the show thrilling and exciting because of how the contestants struggle every day to be on the top and eventually become the winner of the show, the Sole Survivor.

Does Hulu have all seasons of Survivor?

Hulu is a great place to watch Survivor, but the downside is that you can only catch season 1-34 on demand on the Hulu app, Hulu with Live TV, and on the Hulu website on your computer.

You can also catch live episodes with your Hulu Live TV subscription.

Not that bad in case you need to get your Survivor fix, but there is one better option mentioned below.

Is Survivor available on Netflix?

The premium subscription platform, Netflix, now has all episodes from seasons 20 (Survivor: Heroes vs Villains 2010) and 28 (Survivor: Cagayan 2014).

Since Survivor is a show from CBS Entertainment, most seasons of the show are more likely available on CBS All Access (rebranded as Paramount Plus).

Catch all seasons of Survivor on Paramount Plus here.

Can you watch Survivor on Amazon Prime?

The American reality show is also on Amazon Prime Video, so you can easily watch Survivor episodes on your favorite streaming device.

The seasons available on Prime are random, and some seasons are missing episodes, so don’t expect to watch a specific season and see it there.

Where can I watch all seasons of Survivor?

If you can’t get enough Survivor action and want to catch up on the series, we highly recommend watching all seasons on Paramount Plus.

Paramount Plus is an online streaming service that has all episodes of Survivor from the first season until the 40th season, which you can watch on your Apple TV, Android TV, and even on your mobile devices. Pretty cool, right?

CBS All Access (rebranded as Paramount plus) offers a seven-day trial when you sign up for the first time on the streaming platform.

Paramount Plus has two monthly subscription plans; the basic plan worth $5.99 a month with limited commercials, and the premium commercial-free plan for only $9.99 a month that grants their subscribers unlimited access to their streaming library.

You can easily catch your favorite American reality shows including Survivor and other classic reality shows such as The Amazing Race, Teen Mom, Jersey Shore, Big Brother, RuPaul’s Drag Race, and many more when you subscribe to their amazing plans that are definitely worth the money.

Still not convinced? Sign up for Paramount Plus here and see for yourself. 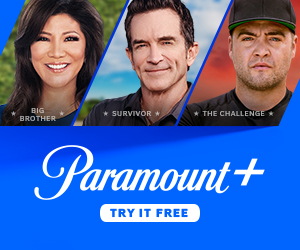 Where to Watch The Real World Homecoming?