Are you ready to play around Adventure Bay?

I’m sure your little ones are, which is why you are liking looking for where you can watch Paw Patrol.

Paw Patrol is a show about 6 helpful pups and their leader who is a boy named Ryder. They help all of the citizens around Adventure Bay when they are in trouble. It’s a great show for teaching teamwork, planning, and helping others.

The songs are also SUPER catchy, so expect to have them all stuck in your head.

Is Paw Patrol on Nickelodeon or Nick Jr.?

Paw Patrol is a part of the Nick Jr. family of kids shows, and so will obviously be on the Nick Jr. channel if you have cable or satellite.

That said, Nickelodeon does have a morning block of Nick Jr. shows on weekdays, so you should be able to catch your favorite Adventure Bay pups there as well.

Even if you are a cord cutter, don’t fret! There are still plenty of ways to watch Paw Patrol through popular streaming platforms.

Is Paw Patrol Available on Netflix?

Netflix houses a ton of great kids content, but unfortunately Paw Patrol is not one of those shows as of the writing of this article.

Netflix does house a few kids Nickelodeon movies such as Jimmy Neutron: Boy Genius and A Fairly Odd Summer, but most of their Nick TV shows are relegated to the older crowd with shows like iCarly, Liv and Maddie, and Sam & Cat.

If you want to watch Paw Patrol, you will have to move to one of the other options below.

Is Paw Patrol on Amazon Prime?

Amazon Prime is another great resource for kids shows.

You may get excited when you see Paw Patrol listed when you do a search on Amazon Prime, but you will come to quickly find out that there is a hidden fee involved.

Amazon Prime has a feature called Channels where you can add content to your Amazon Prime Subscription for an extra monthly fee.

You won’t be able to access Paw Patrol unless you have Prime, and then pay the added $7.99/mo to get the Noggin Channel.

They do start you with a Noggin 7-Day free trial is you just need a quick binge or want to pay for the channel, but otherwise you are out of luck here.

CBS All Access is now Paramount+, and they have a great deal going on right now because they are promoting the new merger of platforms.

Paw Patrol can be accessed at no additional cost when you sign up for Paramount+.

Check out the last section of this article for a great deal on streaming for Paramount+.

No job is too big, no pup is too small. PAW Patrol is now streaming on Paramount+. Try it FREE!

Is Paw Patrol on Hulu?

Yes. With the right package.

Nickelodeon’s deal with CBS and Paramount+ has made it hard to find that show available for on-demand streaming, but Hulu may still offer an option.

With the Live TV option through Hulu you will be shelling out some cash, but should have access to watch Nick and Nick Jr. shows such as Paw Patrol live and in limited on-demand capacity.

Where to Watch Paw Patrol on Noggin

Nick Jr. shows such as Paw Patrol can often be found on the Noggin Channel.

That said, if you are a cord cutter then you can check out the Noggin App on various streaming devices.

This is a separate subscription from the before-mentioned Amazon Prime channel, and is it’s own app entirely.

You can search for and subscribe to the Noggin app to access Paw Patrol on most smart TVs and streaming devices.

Get A Streaming Service For The Whole Family

There is a ton of Nickelodeon and Nick Jr. content on Paramount+ because the company has made a deal with CBS to deliver most of their content to their streaming platform.

In fact, Nick has it’s own section on the main screen of the app as one of the signature brands of Paramount+.

That means it’s not just where you can watch your favorites like Paw Patrol, but you get other great shows like Peppa Pig, Blues Clues, Dora the Explorer and more!

There are also other brands on the platform including CBS, BET, Comedy Central, MTV, and Smithsonian, as well as a whole bunch of Paramount movies.

That means the whole family gets to enjoy their own TV shows and movies while the kids still get their Paw Patrol fix.

You can start your Paramount+ subscription for FREE here, or by clicking the banner below. 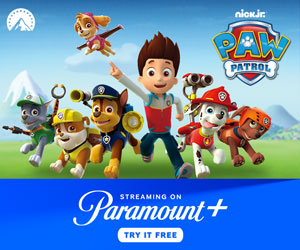