Who lives in a pineapple under the sea?

This is probably one of the most overrated questions of the century for children  as well as those who are children at heart.

Spongebob SquarePants is one of the most iconic shows on TV. It first aired in May 1999 and has been airing  since then – making the series one of the longest-running American animated series.

His personality is what makes him the star of Bikini Bottom and it is, without a doubt, the main reason why the show is best watched with the whole family.

Don’t worry. Even with the pandemic, you can still spend some quality time with your loved ones watching Spongebob just by using the internet and major streaming services on your favorite device.

How? Just keep on reading.

Spongebob Squarepants is a fry cook at Krusty Krab and the main protagonist of the series.

He loves his best friend, Patrick Star, a pink starfish, and goes on epic adventures together. Other times they just like to annoy the citizens of Bikini Bottom ( their underwater city), including their neighbor Squidward Tentacles.

I’m sure you already know who this loveable sponge is, so now let’s talk about where you can watch him!

Can I Watch Spongebob on Hulu?

YES, but only the movie.

If you have plans on watching Spongebob with your kids, Hulu isn’t that good of an option unless you only plan on watching The SpongeBob SquarePants Movie (2004).

You can catch episodes of Spongebob if you have the Hulu Live TV option, but you will be paying more and have to catch the episodes as their air on Nickelodeon.

Is there Spongebob on Netflix?

Paramount Plus (previously known as CBS All Access) offers the best streaming services since they are offering lots of Spongebob SquarePants choices. From binge watching your favorite Spongebob episodes to watching the newly released Spongebob film where he goes on an adventure with his best friend, Patrick.

What’s more amazing is that they also have a wide range of Nickelodeon shows that you can easily access once you finish watching the Spongebob series with your kids.

You can check out a free trial of Paramount Plus here.

Is Spongebob on Amazon Prime?

The Amazon Prime streaming platform also has a handful of seasons of Spongebob Squarepants. With Amazon Prime, you can have access to the series as well as your favorite films.

Plus, they also offer trial periods  when you sign up.

Can I watch Spongebob without the internet?

Just simply download a Spongebob episode or movie of your choice on your device.

Paramount Plus, Amazon Prime, Netflix, and Hulu, all offer entry-level plans that are perfect if you’re still new to these platforms.

Note that downloading and watching episodes offline is  only available once you have signed up for  a plan that is most suitable for you.

What About the Spongebob Movies?

You can easily watch Spongebob films on  streaming platforms on any device  based on the availability I’ve mentioned above.

Can my kids watch other cartoons similar to Spongebob?

Since Nick Jr. and Paramount Plus (CBS All Access) recently made a deal, the streaming platform is a great source for your child’s entertainment.

They have so many shows for you and your child to choose from and most of them are kids and family friendly.

We recommend giving Paramount Plus a try to watch Spongebob and all your other Nickelodeon favorites. 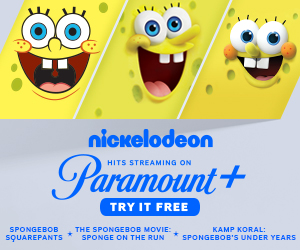