Hurry! Only the first 20 can redeem it!

Lately I keep seeing ads on Facebook for the new Walmart Grocery pickup, so I thought I’d give it a go! We still shopped at Aldi for most stuff, but for our normal trip to Walmart we tried the Walmart Grocery way. It was a cool experience. Read on for more details!

I ordered the groceries on the website, but you can also do it from the Walmart Grocery App. The website was really easy to use. I just typed in the foods I was looking for and added them to my cart, just like any other online shopping. There were cool filters that let me choose brands I was looking for to help get past all the other results they were showing me.

For the pickup time, they have hour time slots that you have to choose where your groceries will be ready during. This seems like a little bit of a hassle, but they email you when your order is ready during that hour, and if you have the app installed you get a notification when they are ready for you to come and get your stuff.

You have to give payment info right away, but the price they give you isn’t final. Some things have to be weighed for pricing, and other things may not be in stock. When this happens they are supposed to substitute your item (while still giving you the lowest price), or tell you they couldn’t do anything about it and that it has been taken off your bill.

Once I had picked my pickup time (the next morning), and entered my payment info, I then downloaded the app on my iPhone so I could “Check In” when they sent the finished email. The app didn’t cost anything to download.

Saturday came and I went about my morning of taking care of Little Cub as usual. I had my order set to be picked up between 8AM and 9AM. I got an email at 7:35AM saying that my order was ready for pickup. The app notification came a few minutes later. I waited till 8:00 to make sure that it really would be ready when I got there (it was a little confusing because the email said order was ready to be picked up at 8:00, although it was obviously ready at 7:35).

I did my check in on the Grocery app. A map popped up showing me a GPS route to Walmart. Kinda creepy, but really cool too! I drove to the store and pulled into the parking lot. 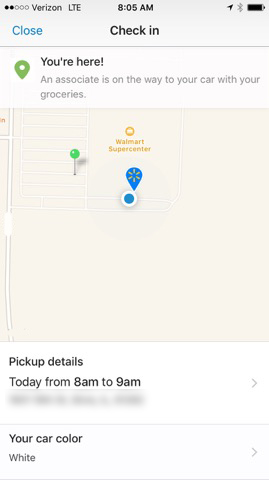 The way to the Pickup section of the store was clearly marked all the way in. I made my way to the section they wanted me to go, and parked in parking spot 8. I didn’t know which of the 8 spots to park in, or where the associate would come from, so I just parked in the first bright-orange painted spot I came to, which happened  to be parking spot 8.

The sign in front of the spot had a phone number to call, but the email and app had told me I didn’t need to call. I checked the app and it said “You are here! An associate is on their way with your order. I just did what the app said and waited. 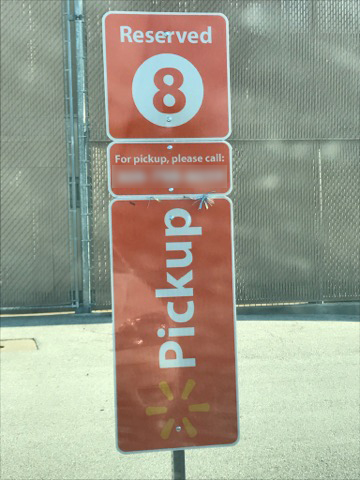 The Grocery Pick Up 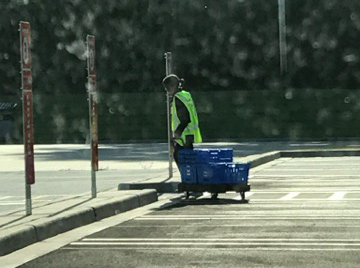 The associate came out of the Walmart building down closer to spot 1 (makes sense right? Yeah, I wasn’t really thinking). It was only a few minutes after I had arrived. Maybe 3 minutes at the most. I got out of my car and greeted her. Since their records must have shown that I was a first time user of the Grocery App and pickup service, she immediately thanked me for using the service and asked how we had heard about it. Then she gave me a goodie bag for being a first time Walmart Grocery Pick-Up customer. That was a pretty cool gesture.

She then proceeded to take the bins with my grocery bags down from her cart, pick the bags up, and put them in my trunk. While she did this she was explaining that they didn’t have the fresh strawberries we ordered, and asked if frozen were okay (for the lower price of the fresh). I said that was fine.

Next she said that the type of baby food I had asked for was out, but she got one that had two containers instead of 1. I had to explain to her that what we had ordered was a stage 2 food, and what she had shown me that she grabbed was a stage 3 food with little bits of food in it. She said she hadn’t known the difference. It’s good that Little Cub is getting more into solids. She asked if I still wanted the food and I said it would be fine. This worked out for my situation, but be careful with this if your little cub is younger and not into more solid foods.

She then showed me the tomatoes she had picked out, as well as the bananas, and asked for my approval on both. They looked good to me, so she put them in the car. I asked if there was a place to ask for different types of fruit (like greener bananas) on the site or the app, and she said this was a feature they would be adding in the next month or so. You can call them and let them know though.

Looking At The Results

As I said earlier, I got to Walmart at 8:04, and I was pulling out of the parking lot by 8:11 with a trunk full of groceries and a better understanding of the Walmart Grocery system as the associate answered my questions and gave me explanations the entire time. This made me feel better about trying this again another time soon.

When I got home I brought the groceries in and checked everything out. It was all well-organized by type of product. The only problem with this was the massive amount of bags I had when I was done. I mean they put a sponge in one bag entirely by itself. They also put my milk in a bag. These things seemed kind of wasteful to me, but it was all still very well organized.

It was cool that they handed me a goodie bag for being a first time Grocery customer, and cool to get free treats (even if they weren’t the best treats ever).

I am so not a fan of the sparkling water, and the granola bars weren’t super great, but you can’t argue with Capri Sun and gum!

My Review on Walmart Grocery Pick-Up and the App

Overall, I would say that my experience with the Walmart Grocery App and Pick Up went pretty well. It was really easy to order online, the app was great for checking in, the whole experience was quick and efficient, and I feel like the associate really cared about her job as a personal shopper and wanted the experience to be good for me as well.

I would have to give the app 5/5 stars because it was easy to use, and the check-in feature was really cool, plus the fact they knew I was there and I didn’t have to call into the store.

I would have to give the pick-up a 4/5 stars, only because there was some confusion on the difference between baby foods, and I hope this is something they learn the difference of so my Mommy Bear readers out there don’t end up with the wrong food for their little cubs.

This means my overall rating is 4.5/5 stars.

I think this could easily be bumped up to a 5/5 as the associate seemed like the type of worker who will keep learning on the job and get things right the next time around, but for now I have to leave my rating as is.

Special Coupon Code For 20 of My Readers!

In my confirmation email that was sent to my inbox confirming that I had picked up my order, they gave me a referral link to try and get people to try the service. If you use the button below, and your order is more than $50, you will get $10 off of your Walmart Grocery Pickup! I will also get $10, so thank you!

These are affiliate links. You will not be charged any extra for purchases made through the link, and you will earn me a commission to help keep my site running!

PlushBeds Review: The Best Mattress To Make The Best Moms 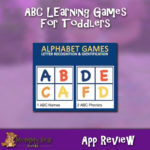