The Best and Easiest Way To Teach Kids Chess 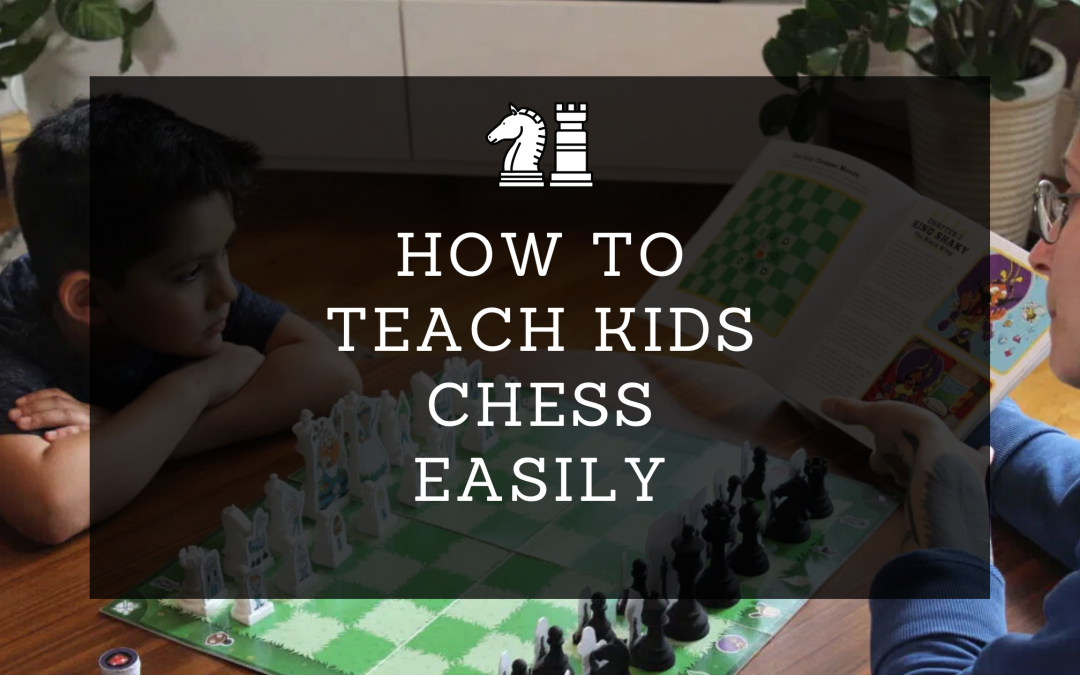 Want to teach kids chess but don’t know how? Good thing there’s Story Time Chess to have your kids start learning how to play chess.

If you love watching Netflix series then you’ve probably heard about the hit series, The Queen’s Gambit.

It is a 2020 American series about a woman named Elizabeth Harmon who got hooked on playing chess and eventually become a chess prodigy.

The title is based on a real chess move of the same name and it consists of three moves that are designed to secure the center of the chessboard.

The iconic board game itself has different rules and strategies that make it a very interesting game for most people.

Some like to start playing chess at a young age until they turn into adult chess players participating in chess tournaments.

However, the game doesn’t really have a specific age requirement to be played, so you can start playing chess with your kids.

Chess is a classic game of strategy between two players against each other using 16 pieces on each side on an 8×8 chessboard.

It has a total of 32 chess pieces that’s composed of Pawns, Knights, Bishops, Rooks, Queens, and Kings.

Each chess piece has its own special moves around the board.

The game of chess originated in Northern India where it was called “chaturanga” or the “Game of Kings” in the 6th century.

Chess eventually made its way throughout Asia and Europe as more and more people started to like its concept.

Sergey Karjakin holds the record as the youngest chess grandmaster when he was still 12 years old and has become an inspiration to most kids his age.

Karjakin started playing chess when he was still 5 years old and became an international master after six years of playing.

Can you believe how this board game turned this man into a world champion just by moving chess pieces and beating other chess players?

The game itself can be hard to understand at first since there are so many different rules and moves involved.

But if you want your kids to be like Karjakin or Beth Harmon, then this is the best time to start teaching your kids how to play chess with Story Time Chess.

What is Story Time Chess?

Story Time Chess is a board game that helps children learn the basics of chess with their unique chessboard that consists of silly characters and custom chess pieces.

Their products also have fun stories and high-quality materials that are safe for children ages 3 and up.

This makes learning chess simple and fun compared to a regular chessboard that might look too advanced for them since it has plain features.

The best part is that Story Time Chess’ board games don’t require parents to have chess knowledge to teach children.

Parents can choose from:

Mega Bundle – costs $79.99 and includes all the necessary learning materials that your child needs.

With Story Time Chess, kids can learn the basic concepts of playing chess through their fun board game that they can play at home.

It consists of a unique cast of characters and stories that focuses on chess rules to help children know how different pieces move.

This way, they can get familiar with the basic rules as early as age three through their award-winning curriculum.

Wesley So, a chess grandmaster and a former US Chess Champion, likes Story Time Chess for its impressive materials that are very useful for kids.

Actors Hugh Jackman and David Burtka also love Story Time Chess and are proud to have it for their children.

Benefits of learning Chess at a young age

Learning chess at a very young age has lots of amazing benefits such as developing critical thinking skills and improving academic performance.

Lastly, chess can also help prevent Alzheimer’s since it is a good exercise for the brain.

Since chess is a game for all ages, it’s best to introduce it to your kids while they’re still young.

This way, they can learn different strategies easily and develop more skills as they get older.

Story Time Chess has partnered with Tutor Carrot, to teach your kids chess through stories and characters that are based on the game itself.

Classes are taught by certified storytellers, and your kids are tutored at the comforts of your home through virtual classes.

Parents can choose different classes depending on their child’s learning ability and it only costs $25 per learner per class.

Lessons are on high-quality videos and taught by their team of amazing hosts.

It also includes stories that tell about the different piece movements, physical exercises, and on-board exercises.

This makes it easier for children to understand the concepts of chess.

It’s no wonder why every parent and student loves Story Time Chess.

Parents can also get updates on their child’s progress in chess through their special feature called Parent Engagement Portal.

According to their website, they’re close to reaching 10,000 students on their program.

According to a study, the all-time favorite board game is effective in increasing the IQ scores of 4000 second grade students after a few months of learning the game.

Chess is a very good pastime and it results in enhanced cognitive skills by improving the brain’s function.

Can you be too old to learn chess?

No one is too old or too young to play chess!

It’s never too late for anyone to start playing chess and you can easily find a classic chess board anywhere.

Some people even start at an old age and are enjoying afternoon chess matches with younger ones.

How do you make chess fun for kids?

Alright, so you finally want to introduce chess to your kids, but how can you make it fun and exciting?

It’s pretty easy, you just have to NOT focus on the rules all the time.

But don’t forget to remind them too!

You can also use a beginner set like a magnetic chess board that you can find at any toy store.

And if you’re also a beginner like your kids, you can opt for chess classes that can help the entire family play the game.

It can be confusing at first but when you start being familiar with the rules, you might get addicted to the game too.

At what age should I teach kids chess?

Children can start playing chess no matter how old they are as long as they’re ready and interested.

Teaching kids chess can be hard especially when you, as a parent, don’t have any idea how to play it.

Luckily, with Story Time Chess, you can start teaching them how to play the board game even at age 3.

That’s why we wanted to try it for ourselves as well.

Our Experience with Storytime Chess

Our 2 year old grabs the pieces and play-acts with them. He loves hearing the stories and making up his own stories making the pieces interact and talk to each other. Not exactly how it’s meant to be played, but it’s cute and it’s a start.

Our 4 year old also loves hearing the stories and reciting back the mantras they give you that explain why each piece moves the way it does.

She loves King Chomper and King Shaky and is excited to get to the stories with the queens in them.

She plays the mini-games decently well and with some coaxing can complete them according to the rules.

I find the stories to be an awesome way to help explain why the pieces move the way they do, and the whole concept of Story Time Chess is awesome.

I’ve been playing chess since I was 10, but I’m ecstatic to be able to start teaching them at a younger age. I love the concept of this game so much we decided to write this review even though we aren’t affiliates for them!